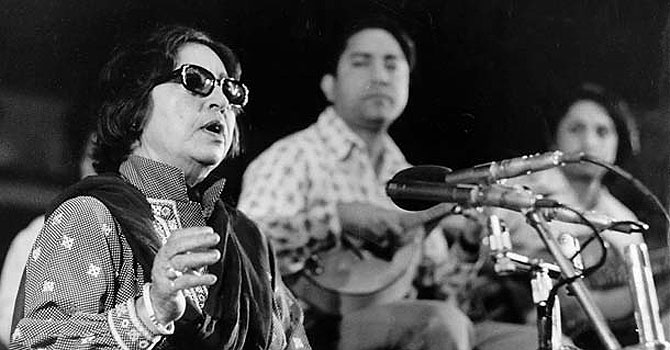 Malika Pukhraj performing at concert in 1970.–Photo courtesy http://www.malikapukhraj.com
The 9th death anniversary of legendary classical musician and singer Malika Pukhraj was observed on Monday.
Born in 1912 in Mirpur, Pukhraj later moved to Kanak Mandi area of Kashmir, where she spent the early years of her life.
She was given the name “Malika” at birth, by ‘Majzoob’, ‘Baba Roti Ram, a spiritualist, in Akhnoor area, and named “Pukhraj” by her aunt. Pukhraj received her training from Ustad Ali Baksh Kasuri, father of Ustad Bade Ghulam Ali Khan.
At the age of nine, she visited Jammu and performed at the coronation ceremony of Maharaja Hari Singh, who got so overwhelmed by her voice that he appointed her as a court singer in his Darbar. Her unmatched approach to singing brought forth a range where poetry and music blended so well together.
Later, Pukhraj got married to Syed Shabbir Hussain Shah and had six children, including Tahira Syed, one of Malika Pukhraj’s  children, who emerged as a well-known singer of Pakistan.
She was among the greatest singers of British India in the 40s, and after partition, she migrated to Lahore, Pakistan, where she received further fame through her radio performances.
Her rendition of Hafeez Jalandhri’s song, “Abhi To Main Jawan Hoon”, received immense popularity and is still enjoyed by millions not only in Pakistan, but also in India.
In 1977, when All India Radio, for which she sang until partition, was celebrating its Golden Jubilee, she was invited to India and awarded with the ‘Legend of Voice’ award.
In 1980, she received Pride of Performance Award, Pakistan’s highest civil award. Pukhraj also recorded her memoirs in the novel Song Sung True.
Compunode.com Pvt. Ltd. (www.compunode.com).Designed for Dawn.
Copyright © 2022, Dawn
Scribe Publishing Platform