Download the Full Report   |   Download the Key Findings
One of the most striking measures of Amazon’s monopoly power is the extraordinary amount of money that it’s able to extract from the independent businesses that rely on its site to reach customers. In this report, we find that, over the last two years, Amazon’s revenue from the fees it levies on third-party sellers has more than doubled. In 2019, Amazon pocketed $60 billion in seller fees.This year, its take will soar to $121 billion, our new research finds.
To put that in perspective, had Amazon’s third-party marketplace been a stand-alone company in 2020, when it took in $90 billion in seller fees, it would have ranked 31st on the Fortune 500 list of the world’s largest corporations — bigger than Citigroup, Facebook, and General Electric. This year, with its revenue from seller fees expected to swell by an additional $31 billion, Amazon Marketplace may end up large enough to qualify for a spot in the top 25 (if it were a stand-alone company).
The staggering scale of these fees provide evidence of Amazon’s monopolization of the online market and the high costs that come with it. Businesses that make or sell consumer goods and want to reach shoppers online have little choice but to sell on Amazon’s site. That’s because more than 60 percent of Americans looking to buy something online start their product search on Amazon, rather than a search  engine.[1] In 15 of 23 major product categories, the tech giant captures more than 70 percent of online transactions.[2] Companies large and small must either sell on Amazon or forfeit access to much of the market.
As we detail in this report, Amazon is exploiting its position as a gatekeeper to impose increasingly steep tolls on these businesses. Using a variety of fees, Amazon now pockets a 34 percent cut of the revenue earned by independent sellers on its site, our analysis found. That’s up from 30 percent in 2018, and 19 percent in 2014.
Operating an unregulated, monopoly tollbooth that sits between businesses and consumers is wildly lucrative. Over the last few years, seller fees grew much faster than every other major revenue stream at Amazon. They grew faster than Amazon’s own retail sales and faster than its Prime membership program. They even outpaced Amazon Web Services (AWS), the company’s massive cloud-computing division. AWS is on track to post about $61 billion in sales this year — a vast sum, but still only half the revenue Amazon will generate from seller fees.
The first part of this report looks at the size and growth of Amazon’s tolls and the crushing burden they place on independent businesses. The second part examines the pivotal role these fees play in the architecture of Amazon’s monopoly power, and how the company tries to hide that fact. The final section outlines what policymakers must do to restore an open, fair, and competitive online market. 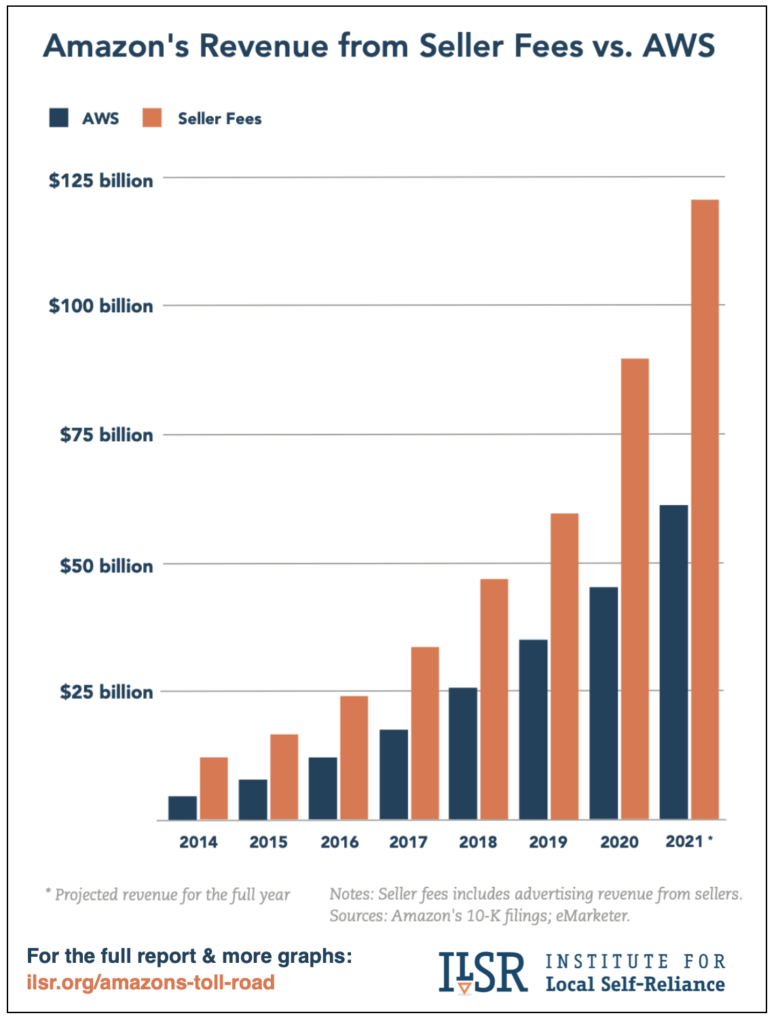 WHEN AMAZON founder and former CEO Jeff Bezos was questioned about Amazon’s soaring fees at a Congressional hearing last year, he insisted that sellers  were simply opting to buy more services. Congresswoman Mary Gay Scanlon, referencing data from our first report on this topic, Amazon’s Monopoly Tollbooth (July 2020), asked him, “Doesn’t Amazon’s ability to hike those fees so steeply suggests that Amazon enjoys market power over those sellers?” Bezos replied, “I think what you’re seeing there when you see these fees going up, what’s really happening is that sellers are choosing to use more of our services that we make available.”[3]
In fact, as we show in this report, Amazon has sharply increased the base price it charges sellers simply to list and sell a product. A few years ago, the base price was Amazon’s referral fee, which, for most items, is a 15 percent cut of the sale. But since then Amazon has turned over much of the space on its search results pages to sponsored product ads.[4] Sellers used to be able to rely on good customer ratings to land their products on the crucial first page of search results. But today they must pay for ads to get their products in front of customers. This year, sellers will give Amazon an average of 4.6 percent of their sales revenue to pay for ad space, we estimate. That’s up from 3.4 percent in 2020, and 1.1 percent in 2016. This additional cost is not, as Bezos claims, a service; it’s a way to extract more from sellers. It’s price-gouging. 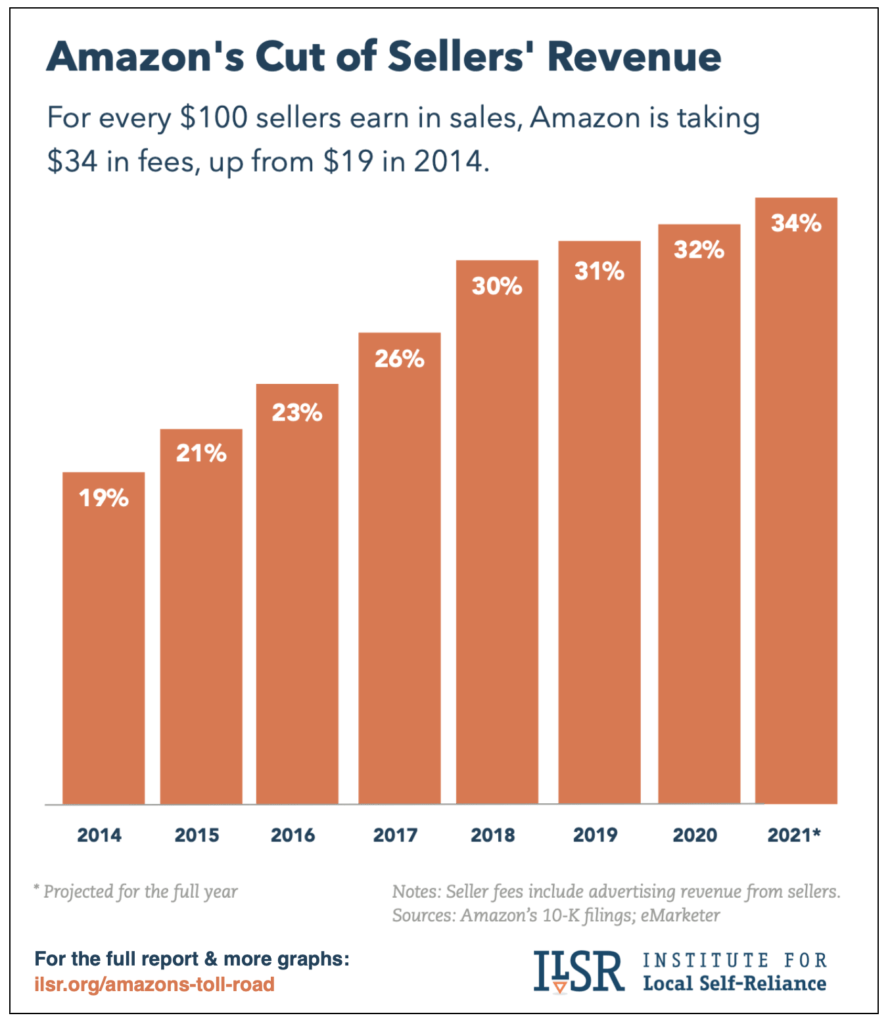 In a similar fashion, Amazon has compelled sellers to buy its warehousing and shipping service, Fulfillment By Amazon (FBA). Amazon’s algorithms heavily favor sellers who do so, making FBA all but required in order to generate sales on the site.[5] As a result, the share of sellers who have left other carriers and signed on to FBA has soared in recent years.[6] By compelling this captive base of businesses to use its shipping service, Amazon has grown into a major logistics provider almost overnight. Its parcel delivery operation now rivals that of the U.S. Postal Service in scale.[7] And, over the last few years, Amazon has steadily raised its storage and shipping fees, using FBA as yet another way to squeeze revenue from sellers.
The crushing weight of these fees is capsizing many businesses. When his startup began selling its unique sports apparel on Amazon in 2016, it was a viable business, says Steve, who asked not to be identified for fear that Amazon would retaliate against his company. But then Amazon increased its referral fee for clothing, from 15 percent to 17 percent, and devoted a growing share of the space on its search results pages to sponsored product ads. To sell $10,000 worth of clothing today, Steve explains, he must pay Amazon $1,700 in referral fees and spend another $1,500 to $2,000 on ads, not to mention a host of smaller fees. “Amazon is now taking more of the pie than I am. And you cannot run a sustainable business like that,” he says.[8] 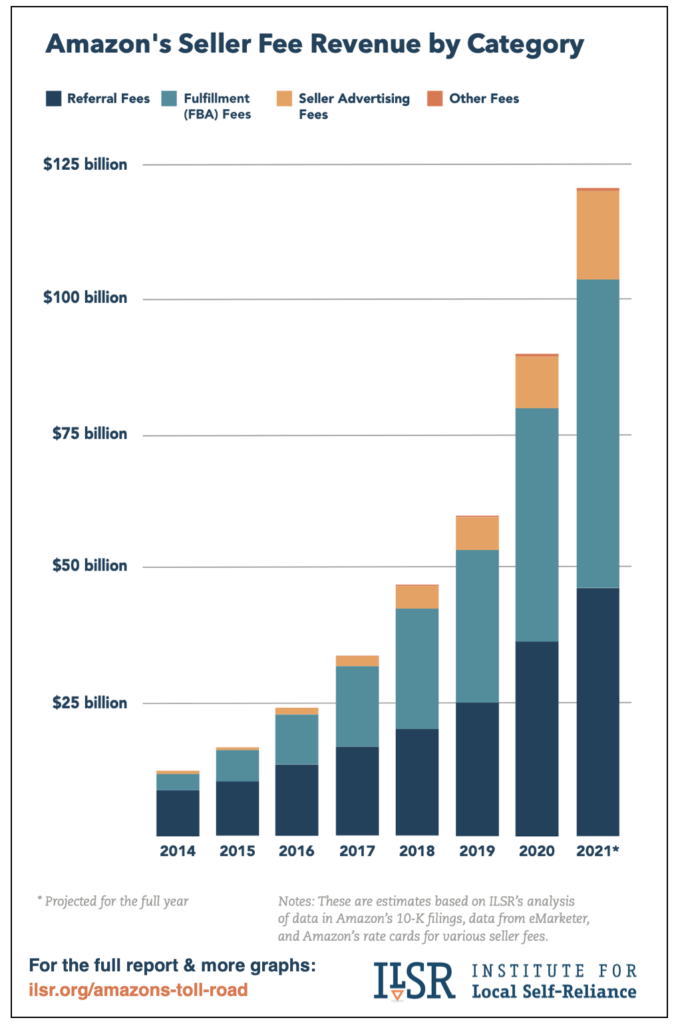 Steve has tried to escape Amazon’s grip by selling on other platforms. But he’s had no luck generating more than a trickle of orders on these sites. It would help if he could lower his prices on these sites, he says, but Amazon effectively blocks him from doing so under its “fair pricing policy.” Even though some competing platforms charge much lower fees, if Steve lowers his prices on another shopping site, Amazon’s algorithms punish him by demoting his products in its search results or making them ineligible for the buy-box, which causes his sales to plummet.[9] He can’t afford that, and so he inflates his prices on other sites to match those on Amazon.
Many other sellers do the same. As we noted in our 2020 report, this means that Americans are paying higher prices across the web because of Amazon’s steep tolls and its power to compel sellers to inflate their prices elsewhere. Earlier this year Karl Racine, the attorney general of Washington, D.C., filed an antitrust case against Amazon alleging that its pricing policy functions as an “anticompetitive restraint” that has “artificially raised the price of goods to consumers across online marketplaces” and “insulated [Amazon’s] dominance.”[10] By blocking sellers from offering lower prices on other sites, Amazon has ensured that its own prices appear competitive. This has kept Americans locked into their Amazon shopping habits, which, in turn, has allowed the tech giant to impose ever-steeper tolls on sellers. 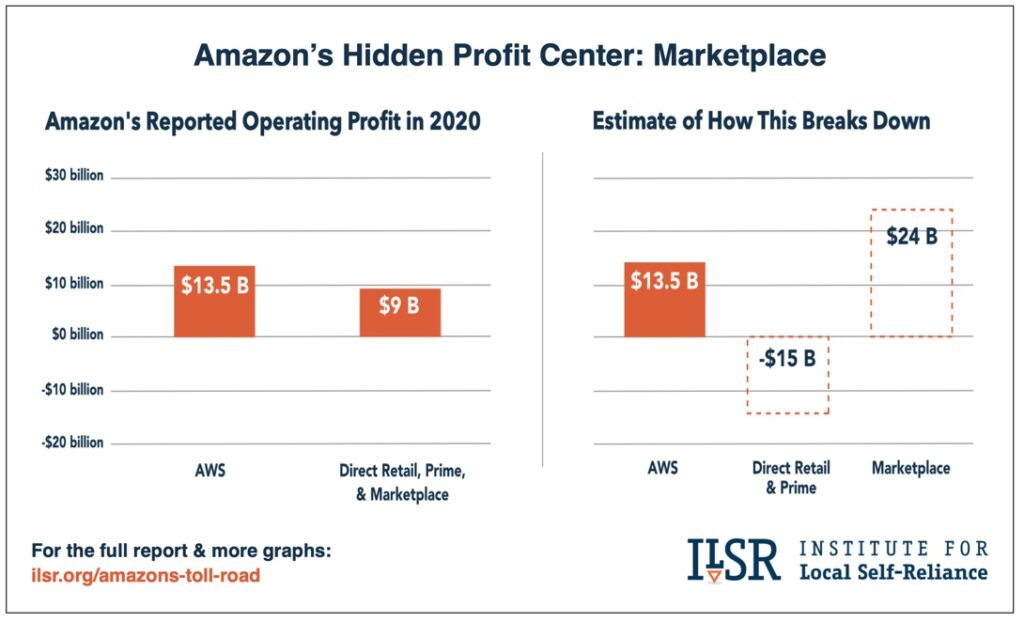 THESE TOLLS are highly profitable. In one of the more eye-opening findings of this report, we conclude that seller fees likely generate more profit than AWS. This contradicts conventional wisdom about the company; news stories commonly describe AWS as the source of most of Amazon’s earnings.[11] Indeed, the tech giant’s own quarterly financial reports seem to suggest as much. But these reports hide the profitability of seller fees. They breakout profits for AWS separately, but lump together the rest of Amazon’s divisions, disclosing only combined profit figures. This allows Amazon to use sizeable losses and expenses incurred in other divisions, namely its Prime program and its own retail sales, to offset, and thus obscure, the outsized profits Amazon extracts from small businesses and other third-party sellers.
Drawing on analysts’ estimates of the margins Amazon likely earns on seller advertising and other seller fees, we find that Marketplace may have generated operating profits of $24 billion in 2020 — significantly more than the $13.5 billion in  profit that Amazon reported for AWS. This is only a rough estimate based on available information. However, given the fact that seller fees generate more than twice the revenue of AWS, and seller commissions and search advertising have negligible marginal costs, there’s strong reason to believe that Marketplace is a bigger source of profit than AWS.
AWS has long been seen as Amazon’s cash cow. But this report finds that the tech giant has a second cash cow, which it keeps quietly out of view. 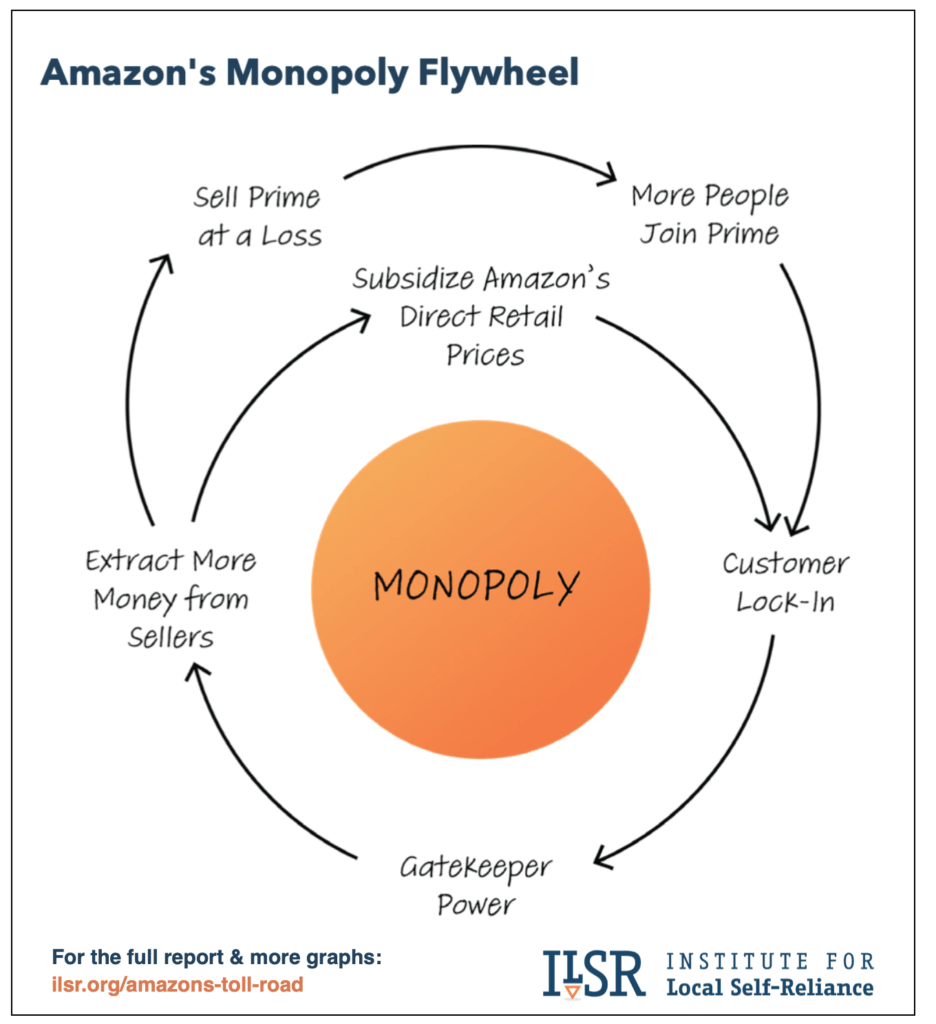 MARKETPLACE FORMS the linchpin in Amazon’s monopolization strategy. This vast stream of revenue allows Amazon to engage in two anti-competitive tactics that are essential to maintaining its dominance in e-commerce.
First, Amazon uses seller fees to absorb massive, multi-billion dollar losses on Prime.[12] These losses are predatory. They’re a key way that Amazon locks-in consumers and maintains its hold over the market. By providing free shipping, streaming video, and other perks for an annual membership fee that that doesn’t come close to covering the actual costs of these services, Amazon has induced 70 percent of U.S. households to sign up.[13] Once someone joins Prime, studies show that they tend to make Amazon’s platform the first, and often only, shopping site they visit.[14]
Second, Amazon uses profits from seller fees to subsidize its own retail division, enabling it to sell household staples, such as diapers and laundry detergent, at prices that are competitive with Walmart. To maintain its ironclad dominance of online retail, Amazon can’t just be a third-party marketplace. It also has to be a Walmart supercenter, with Walmart’s pricing on the pivotal, high-volume items you’d find in a supercenter. Amazon can’t rely on third-party sellers for these items; it sells most of them itself. To keep its prices as low as Walmart’s, while providing free shipping and spending aggressively to expand, Amazon uses the revenue it extracts from small businesses and other sellers to cover most of the cost of processing, fulfilling, and shipping its own “first-party” retail orders.
The losses Amazon sustains on Prime’s free shipping and selling goods below cost are how it maintains its monopoly power. The profits it reaps from imposing tolls on independent sellers are the rewards of that power. It’s no wonder Amazon wishes to keep both sides of this equation a secret. Its financial reports do so by offsetting one with the other. 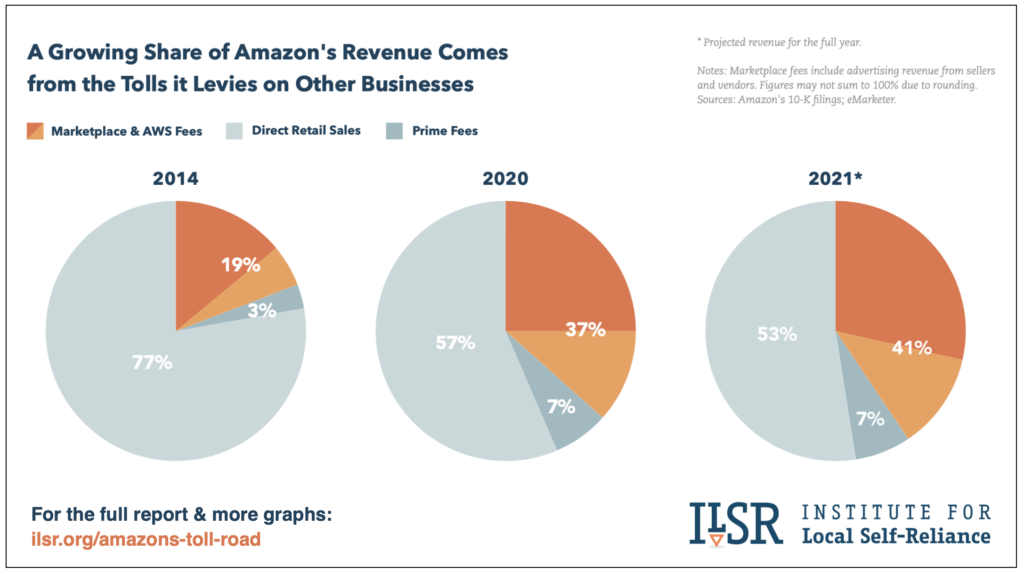