Should You Buy the Dip in Amazon? Here's My Take – RealMoney 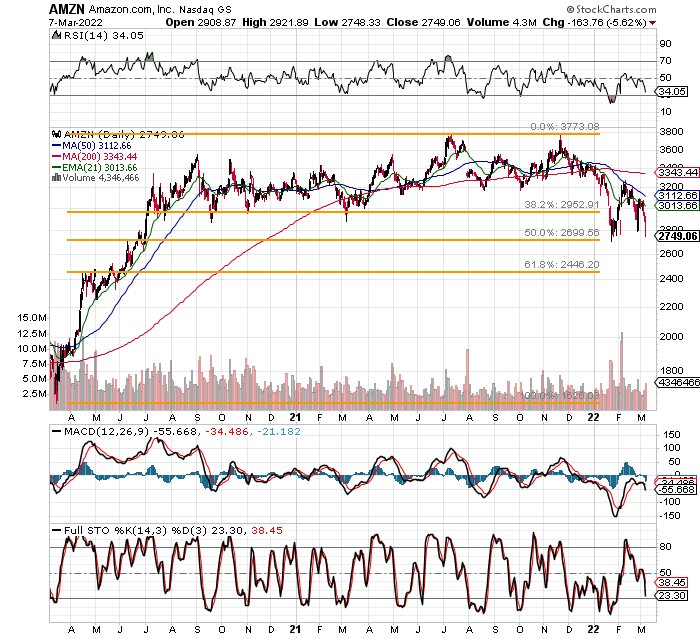 The stock did trade lower this past January, but Monday was the lowest close for AMZN since June 2020. Readers will note that as horseshoes and hand grenades go, Monday was the fifth (or so) time this year that the stock has approached a 50% retracement of the March 2020 through November 2021 rally. The stock has long since surrendered its 50 and 200 day simple moving averages, all three components of the daily MACD are in negative territory and both the Relative Strength Index and Full Stochastics Oscillator are this >< close to reaching a technically oversold condition.
On Tuesday morning, news broke that Alphabet (GOOGL) would acquire cybersecurity firm Mandiant (MNDT) for $23 per share in cash. MNDT closed at $22.49 on Monday, but at $19.38 on Friday. Word on Wall Street is that this could pressure firms like Amazon and Microsoft (MSFT) to add to their cloud portfolios. That might be difficult in the immediate to short-term future as Amazon is busy trying to acquire MGM Studios (MGMB) for $8.5B at this time and that deal is currently undergoing FTC scrutiny. As far as Microsoft is concerned, they are trying to gulp down an even bigger fish… with their announced $68.7B all cash bid for Activision Blizzard (ATVI) .
Away from M&A activity, Amazon announced last week plans to close all 68 of the firm’s physical bookstores, pop-up shops, and 4-star stores in large cities. Those of us who wondered just what Amazon was doing in the physical retail space outside of Whole Foods in the first place lost some patience. Amazon, for their part, mentioned in that release, will continue to work on other brick and mortar concepts. That was enough for me at the time. C ya.
Walmart (WMT) and Target (TGT) are both large brick and mortar retailers that have embraced an elevated focus on e-commerce. Walmart trades at 21 times forward looking earnings, Target trades at just 14 times. Amazon, aside from AWS and advertising which has driven nearly all of the firm’s margin of late, is an e-commerce retailer trading at (even after all of this selling) 56 times forward looking earnings. Why would Amazon focus on increasing its exposure to a business less highly valued by investors? No. Close the bookstores and just walk away. Groceries are enough.
For the life of me, maybe because I am a spoiled investor, but I can not figure out why CEO Andy Jassy has shown to this point no interest in splitting the stock after what such action has done for the likes of Apple (AAPL) and Tesla (TSLA) shareholders. The action could also attract middle class retail investors who want to purchase at least one full share of stock when they invest.
Honestly, I don’t think it takes much to get Amazon back on track. The e-commerce business drives the advertising and services businesses as well as Prime membership. There’s plenty to like. However, as far as market sentiment is concerned, valuation is now an issue like it has not been for years, and FANG or no FANG, by the usual metrics used to measure valuation, Amazon has not been sufficiently trimmed. Amazon is the most expensive FANG name. In fact, Alphabet and Meta Platform’s (FB) are no longer even expensive.
Amazon does not report again until late April. As of December 31st, the firm held a net cash position of $96.049B, a record and up substantially from just three months earlier. Current assets had ballooned to $161.58B on growth in inventories and accounts receivables. This topped current liabilities of $142.266B, that was also up quite a bit on growing accounts payable and accrued expenses. That left Amazon with a current ratio of 1.14, which is more than acceptable for a large diversified business of this kind. Total assets amounted to $420.549B versus total liabilities less equity of $282.304B. Long-term debt actually moderated slightly to $54.944B, which the firm can pay for in cash and still have a nice-sized balance. This balance sheet easily passes the Sarge test.
Off-balance sheet items, Amazon ended last year with a tangible book value of $231.37 per share (a new record) and drove free cash flow of $6.20 per share. the firm’s first positive free cash flow quarter after three successive negative quarters. It is very hard to have a problem with this firm from a fundamental perspective away from valuation. 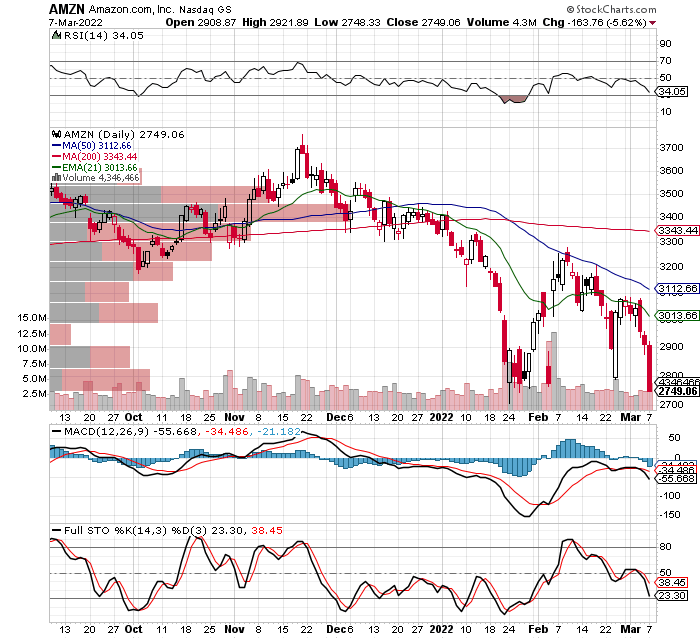 As AMZN sets up for a fourth or fifth attempt at cracking $2,710 to $2,740 support, readers will see that when volume by price is added to the left side of the chart that there is not yet a whole lot of volume at these prices despite multiple trips to this area. That means that we don’t know how much demand there really is here. There might not be that much. In contrast, readers can easily see that up by the 200 day SMA ($3,343.44), there is a whole lot of wood to cut.
There is not enough here, technically to get involved until I see clear signs of support, which I don’t just yet. The fundamentals outside of valuation are an ally. That said, valuation is not an ally, and the technicals, while inconclusive (for the moment), just don’t give me enough. To get long ahead of confirmation of support, I think at this time, would be gambling. I still like AMZN, just not now.
(AMZN, GOOGL, MSFT, WMT and AAPL are holdings in the Action Alerts PLUS member club. Want to be alerted before AAP buys or sells these stocks? Learn more now.)
At the time of publication, Stephen Guilfoyle was Long MSFT, WMT equity.
Let’s check the downtrend lines in charts of the Invesco QQQ and the PHLX Semiconductor Sector index. And, let’s check on that — surprise? — rally on Wednesday.
The big question is whether this bounce is a significant turning point or just a counter-trend move that is going to snag some folks that became too bullish too quickly.
My focus is digging up some small names I can see accelerating quickly once the market finds its footing.
Let’s look at the top oil stocks with high dividends and with exposure to high oil prices.
Is this the time to buy?
Thank you, your email to has been sent successfully.
We’re sorry. There was a problem trying to send your email to .
Please contact customer support to let us know.
Email Real Money’s Wall Street Pros for further analysis and insight
Already a Subscriber? Login
© 1996-2022 TheStreet, Inc., 225 Liberty Street, 27th Floor, New York, NY 10281
Except as otherwise indicated, quotes are delayed. Quotes delayed at least 20 minutes for all exchanges. Market Data & Company fundamental data provided by FactSet. Earnings and ratings provided by Zacks. Mutual fund data provided by Valueline. ETF data provided by Lipper. Powered and implemented by FactSet Digital Solutions Group.
TheStreet Ratings updates stock ratings daily. However, if no rating change occurs, the data on this page does not update. The data does update after 90 days if no rating change occurs within that time period.
FactSet calculates the Market Cap for the basic symbol to include common shares only. Year-to-date mutual fund returns are calculated on a monthly basis by Value Line and posted mid-month.
Follow Real Money’s Wall Street Pros to receive real-time investing alerts
Already a Subscriber? Login