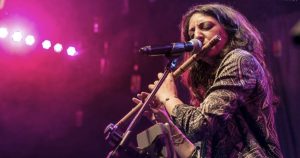 BY PRADEEP ANAND
Writing that first sentence about an incredible, memorable musical experience is always difficult.
There, I did it! That first sentence has been established, and now I must move on to explain why I thought it was an “incredible, memorable musical experience.”
Very simply, Rasika Shekar is an exceptionally talented performer who swept us off into a musical ionosphere from the very first note that came out so melodiously from her flute.
And then she kept us floating in that sublime state with songs and compositions in so many different genres, from singing energetic Punjabi folk songs to subtle moving ghazal classics by Mallika Pukhraj and Mehdi Hasan, a Jagjit Singh medley, with her sister Hrithika Badri, and AR Rahman compositions-instrumental and vocal. And many popular songs from Bollywood films.
And then there were Rasika’s own compositions—Departure, Uproar and others—that added a distinct Jazz component to that flight on the wings of her superbly crafted music.
But what made my evening extra-special was her and her band’s tribute to a composition by a team that included the late Paco de Lucia, a Spanish flamenco guitarist and composer. He was one of the earliest flamenco guitarists to explore Jazz by partnering with the likes of fellow-guitarists John McLaughlin and Al di Meola.
I discovered John McLaughlin in the 1970s which quickly led me to the trio and Chick Correa (Jazz Piano), in a few months, and an incredible journey, thereafter, in Jazz and Flamenco music that was supplemented by Bizet’s opera Carmen.
Around 1990 Paco de Lucia teamed up with Chick Correa and flamenco guitarist Manolo Sanlucar to compose Zyryab, which was a tribute to Ziryab, a poet and musician at the Umayyad court in Córdoba, Spain. He is often given credit for introducing the Persian lute, Barbat, to Spain. This instrument later evolved into the Spanish guitar.
And Zyryab is one of my most favorite musical compositions, ever. It is simply brilliant.
Rasika Shekar (on her flute) and her band paid such an incredible tribute to that composition. It seemed as if they were possessed by the musical spirit of the 8th-9th century poet/musician from Cordoba. It was so ethereal and sublime.
And then there was no descent from that Cloud Nine, even a day later, while drafting this article.
Rasika sang and performed on various flutes. Besides being a superb singer, having been trained in Hindustani and Carnatic vocal music, she was amazing on the flute, transitioning from mood to mood, phase to phase, as needed, in pleasing, powerful and subtle, intricate ways.
Shubh Saran was terrific on the guitar, playing lead at times, switching to rhythm when needed, making the instrument sound so native and integral to the song being performed.
Christian Li played the keyboard like a jazz piano virtuoso, with notes and improvisations that fitted so well in our stratospheric musical aura.
Engin Kaan Guaydin on the drums and Gilber Masoor on Percussions were energetic co-conspirators in this creative musical endeavor, adding subtleties in beat and tempo that complimented Rasika’s flute and vocal melodies.
And, in a corner, Adam Neely played the bass guitar with such precision and filled the aural spectrum very nicely.
And the band members’ solos were excellent expression of their art. We felt that they could have gone on a bit longer.
In fact, I could not help feeling that I could have sat and listened to Rasika Shekar and her band well into the night. When the concert ended our hearts yelled, “Encore! Encore!”
Kudos to Indo-American Association (IAA) for presenting this stellar show at Wortham Centre, a worthy venue for this outstanding program.
More kudos to IAA for attracting superb Indian talents to Houston and fulfilling its vision in creating a culturally vibrant local community by expanding entertainment, education, and imagination in the area through arts and culture of Indian heritage.
IAA’s program for the rest of 2022 is as follows:
Rukmini Vijaykumar – Bharatanatyam, June 10, 2022, 8:00 PM
Andean-Indian – Melodies of Folklore, July 09, 2022, 8:00 PM
Dr. L. Subramaniam with the Houston Symphony, August 06, 2022, 7:00 PM
Dr. Pooja Goswami Pavan – SABRANG, September 10, 2022, 7:00 PM
Ustad Shujaat Khan – While My Sitar Gently Sings, September 24, 2022, 7:00 PM
Ye Jo Desh Hai Mera – Celebrating Thousand Lights for Peace, October 02, 2022, 7:00 PM
We look forward to enjoying these programs just like we enjoyed an evening with Rasika Shekar.
For details, please visit www.iaahouston.org.
PS: Rasika Shekar is a Chemical Engineer (Rutgers University). Later, she studied Jazz and Flamenco music at Berklee College of Music and received a masters degree in performance.
Indo American News
Log in – Powered by WordPress – Designed by Gabfire Themes