Awful Announcing
When Al Michaels spoke with The Athletic’s Richard Deitsch about his first season as the play-by-play announcer for Thursday Night Football on Prime Video, he was rather frank about the quality of games he ended up calling.
I think I’m to the point in my life and career, having watched sports since I was 6 years old, I feel what the crowd feels. The Denver-Indianapolis game (in) Week 4 was a dreadful game. No other way to describe it. No touchdowns. In fact, at one point during the game, I said to (analyst) Kirk (Herbstreit), “Is it possible this game could be so bad that it’s actually good?” He’d never heard that from a partner and went, “No!”
He was spot on with mirroring the tenor of the public itself as NFL fans remain frustrated over the bad matchups that have littered the Thursday slate since its inception in 2006. Yet believe it or not, a positive can come from the incessant complaints: for the league and Amazon, there was more handwringing about the games themselves than streaming quality, crashes or potential inaccessibility.
One year into the company’s 13-year deal for exclusive rights to TNF, both sides as well as the fans seem pleased with how the streaming platform handled weekly live sports broadcasts of such scale.
With one full year in the books, there’s enough broadcasts to ask this simple question – did it work?
In short, yes. And here is why.
For the viewers
If a major streaming platform picked up live sports at a time where streaming TV was in its infancy, you would have expected bells and whistles that were supposed to make the platform’s coverage wholly unique from traditional television. After all, most consumers were led to believe that streamers were the disruptive force needed to change how we watched TV. Yet the one place of constant upheaval on linear television has always been in sports – from often updated graphics packages to additional analysis to the now ubiquitous alternative broadcasts of a single event.
Other than the quickly trashed Amazon-branded down graphics we saw in the preseason, TNF on Prime may have looked and felt very familiar. One could have easily mistaken the Prime stream for Sunday Night Football on NBC, and perhaps that was the point. Amazon spared no expense in building the broadcast from the ground up, including staffing up plenty of people who worked on SNF for NBC, including the highly regarded producer Fred Gaudelli. (Gaudelli was recently promoted to executive producer for both SNF on NBC and TNF for Amazon.) Hiring those veteran hands for all aspects of the production provided an unquestionably seamless viewing experience.
”I think people were wondering if you would get the same clean broadcast as it was on linear,” said Gail Sideman, a TV stage manager and PR expert who has worked on many live sports broadcasts, including with Gaudelli. “A lot of us are longtime streamers and we were wondering if we’d get buffering issues. I think it was more on how it would be delivered, if it would be delivered without interruption.”
The most common criticism of the booth was the apparent lack of chemistry between Michaels and Herbstreit, who were teaming together for the first time. Michaels is as much of an NFL institution as anyone, having called games for the league since 1973. Yet save for a handful of Monday Night Football contests, this was Herbstreit’s first extended run calling NFL games, a run that goes alongside his longtime roles as analyst and lead color guy for ESPN’s college football coverage. Viewers seemed to have picked up on the contrast in experience with the NFL between the two voices. 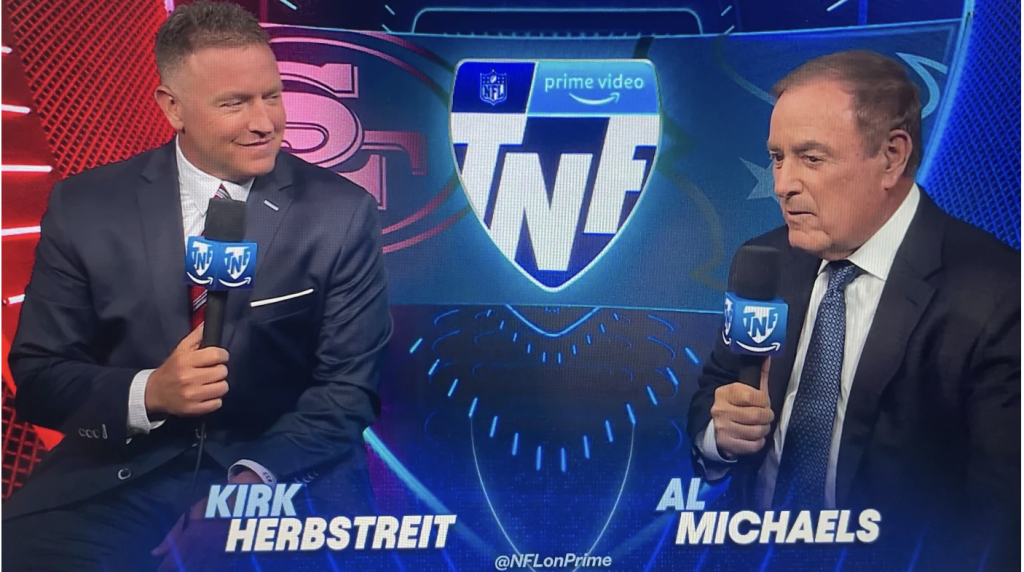 “Honestly I was decently surprised by how good the broadcast was, but I really did not care for the announcers,” said Alexander Sterzin, an adjunct professor and New England Patriots fan in Massachusetts. “Michaels was clearly checked out and disinterested, and Herbstreit’s inexperience with the NFL was telling.”
Not every play-by-play duo clicks immediately, though it may seem like some groupings connect smoother than others from the onset such as FOX’s well-regarded combo of Kevin Burkhardt and former NFL tight end Greg Olsen. “There’s this cult love affair with Al Michaels and Cris Collinsworth on NBC, so people wanted that dynamic,” Sideman said in countering some of the criticism. “It’s hard for announcers to gel right away. I’m not saying that they will after a year or after ten years, but it’s just a different dynamic.”
Having TNF’s typically poor slate of games certainly buys into the perception that Michaels wasn’t at his best, but the observations of the pairing with Herbstreit varies from who you talk to, including Michaels himself, as he reflected in that Athletic interview. “As the year went by, our pacing got better to where we wanted to go,” he noted with Deitsch. “It was never an issue to the point where it was a problem. But he’s a perfectionist. I’m a perfectionist. We wanted this thing to be as perfect as it could be.”
Sideman, however, noted that while the game broadcast itself was just about what you’d expect from NBC, it was the studio show that made an impression that was unique to Amazon. “I think there were more liberties taken with that than in the booth, and I thought it was kind of cool. It was a different kind of group where people said what’s on their minds.”
One area that didn’t gain much traction with people who spoke with AA was Prime’s alternate game streams. The most notable among the additional feeds was PrimeVision Next Gen Stats, a natural inclusion as Amazon has provided enhanced analytics for the NFL since 2017. “I tried the enhanced feed, which in principle was pretty cool but not enough to sustain interest,” said Joe Spinelli, a vice president for a software firm in the Philadelphia region. That shouldn’t come as a surprise since few alternate linear broadcasts outside of personality-driven ones from ESPN like the ManningCast or its Field Cast with Pat McAfee during the college football national title game have much of a cache outside of sports media geekdom.
Having the exclusive rights to TNF – as opposed to simulcasting with the NFL’s linear partners as in previous seasons, lead to a massive increase in traffic onto Amazon’s systems. Fortunately, there were few disruptions that anyone among the dozen individuals who spoke with Awful Announcing could recall, including several not quoted here. Yet in a sign of the times, how fans would find the broadcasts differed greatly. With games on Prime, fans would have to engage in app hopping or switching devices instead of channel hopping via remote. For Reeta Hubbard, a football analyst from Baltimore and co-host of The Gridiron Girls podcast, this wasn’t much of a pain point at all. “The only difference is that I would have to get out of Prime and into my YouTube TV app if I wanted to watch something else like during halftime, which did feel a little weird. But I watch movies on Prime regularly, so going to Prime wasn’t much of an adjustment.”
For Amazon
Quality of the games aside, Thursday Night Football enhances Prime Video’s status as a full-fledged entertainment platform in ways that other programs and events cannot on their own. Lest we forget, however, that Prime Video is still just one part of the overall Amazon Prime subscription. Ideally, viewership would drive up new subscription signups for the service while also engaging current users with more frequency. 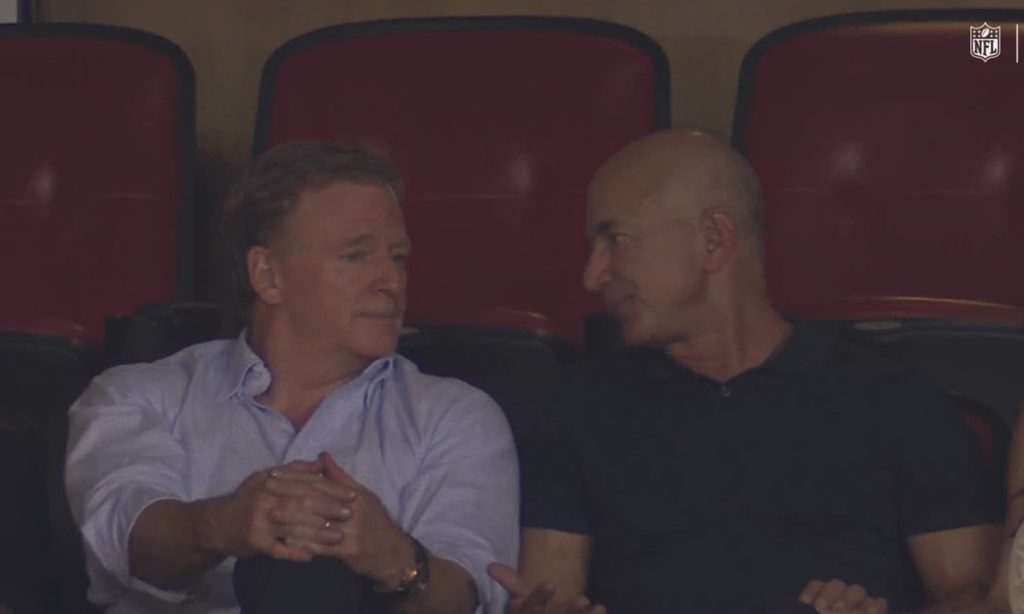